“My dog is my life, and I just want to make him better.”

Luke’s owner was pretty desperate when she called. Her dog, a very handsome eight-year-old Weimaraner, had a large tumor in the upper jaw (aka the maxilla), centered around the canine (the big “Dracula” tooth).

“This process has been dragged out for two months now, and I just need this mass out of his mouth.”

By the way, did we mention that Luke is very handsome? The owner took pictures and made a collage that showed the dramatic and rapid progression of the disease. Nobody could remove the mass in her area (West Virginia). A friend and colleague referred her to Harrisburg Regional. We offered surgery the next day!

Why jump to surgery so quickly? Well, after two months of consultations and referrals and multiple tests, there was only one thing to do: remove the mass to stop it from growing.

Luke’s owner commented: “My husband and I discussed our sudden decision and agreed we had made the right choice for him. I barely slept that night and was a nervous wreck the morning of, but we knew deep down that this was the right path to take and that Luke was in the best hands possible to remove the tumor.”

Before surgery, chest X-rays showed that the mass had not visibly spread to the lungs (we knew, and the owner knew that a CAT scan is more accurate).

Luke received multiple pain medications before, during, and after surgery: by mouth, IV, and in his IV fluid. Preop X-rays of the jaw showed no changes in the bone itself.

The surgery involved removing as much diseased tissue as possible yet keeping his face looking cosmetically good. Without getting into gory details, removing too much would mean that his nose would have no support from the upper jaw. So these patients always look “different” because of how invasive the surgery is. In the end, we removed over half of this upper right jaw! 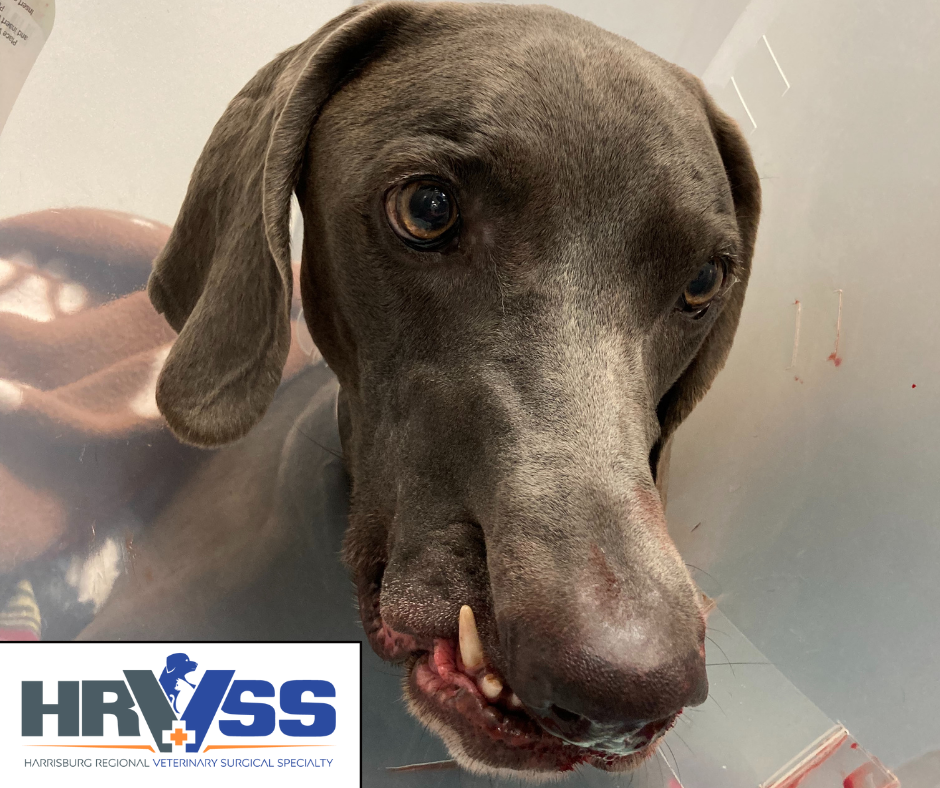 Luke’s owner shared: “I was expecting to see MUCH worse. He looks great considering the surgery was more invasive than originally expected. I researched” maxillectomy surgery” and saw images of dogs missing basically their entire upper jaw. So, in my head, I expected him to look so bad, but I was willing to accept that to remove the tumor. Who cares what he looks like? Who cares that he has a snaggletooth now? I’m going to love him JUST as much as I did prior to surgery, if not even more. This is just the new him, but if it means a step towards being healthy, then so be it! He’s handsome, regardless of how he looks now.”

Luke recovered smoothly from anesthesia and surgery. A little bit too well, in fact. He was standing in his run, looking at everything going on in the treatment room, behaving like nothing ever happened! Giving sedatives was tricky because of a heart condition.

He was so comfortable and active that we decided to send him home a few hours after surgery! Who would have thought?

Here is a quick timeline of what followed.

Day 2: “Luke woke up demanding food. He scarfed that food up like he hadn’t eaten in weeks. His appetite from day one was honestly remarkable.”

“He was ready to continue his life immediately. We would have been curled up in a little ball, acting like death from pain. Not Luke. He was up after surgery and ready to go! It was truly remarkable. I couldn’t believe it.”

Day 3: “I know we were told bleeding postop is normal, but he’s not bleeding that much. Few drops here and there but nothing crazy.”

Day 10: The biopsy report revealed that the mass was malignant melanoma, an aggressive type of cancer. Based on this information, we recommended consulting with an oncologist to discuss the melanoma vaccine – a unique option in vet medicine.

Day 21: “Luke is doing so well. He just received his first melanoma vaccine. He will go to his primary vet to get his 21 days recheck.”

With serious pain medications, most pets do very well after invasive surgery, even when we remove a large section of the jaw.

Luke is lucky he has such dedicated owners. We wish him the best and a happy, comfortable Weimie life.

This is a first: A large study* about jaw surgery (459 dogs) just came out, so I thought I would share some statistics to inform pet owners.